Look, it’s got a little lock, your communications are encrypted !

AND THAT’S A BIG FAT LIE.

You’re not secure, you’re roughly secure as much as the site operator’s security knowledge extends, and that might not mean much.

Let’s keep it short and simple, Transport Layer Security is a protocol for encrypting communication between peers.

While it’s used for other applications such as email, the one you’re most familiar with is HTTP (the famous https:// part of the address).

It basically relies on you (the client) and the remote site (the server) exchanging secret, cryptographic keys, which are subsequently used to encrypt (and sign) messages.

The problem with TLS

One might think “OK so I’ll just turn this TLS thing on and I’ll be fine”, and one would be wrong.

That’s (part of) the problem with TLS, it’s not just a knob you toggle, and then you’re secure.

There are many ways to go about your TLS configuration, and many of them just plain suck.

Indeed there are many subsequent versions of TLS, and they’re all found disparately in the wild, from TLS 1.0 to the newest TLS 1.3.

The problems do not stop there though, within different TLS protocol versions you’re still looking at vulnerabilities galore :

Even should you patch your implementation to resist these, what about Elliptic Curves, your Key Exchange mechanism, the actual data cipher, or the authentication algorithm ?

Covering all the above vulnerabilities and shortcomings would require much more time than you have to read this, so let’s go through the list of how you can create a rather safe implementation.

DNS CAA records basically allow your browser to verify which Certificate Authorities can create SSL/TLS certificates for a given site.

They’re a first line of defense for visitors, and site operators definitely should publish them.

HTTP Strict Transport Security are HTTP headers that the server sends back with its response, and that instruct your web browser to always use HTTPS (in opposition to unencrypted HTTP) when visiting a given domain or subdomain.

HSTS is easy to implement but doing it wrong could also render your website unreachable.

Released in 2018, TLS 1.3 is the latest evolution of the Transport Layer Security protocol.

It’s faster, it’s safer, and you should ensure you offer it to your visitors.

Encrypting communications between 2 peers requires that they share a secret, and it’s the Key Exchange’s responsibility to enable the creation of such an initial secret.

There are many different mechanisms, ranging from RSA to ADH, DH, DHE, ECDH and ECDHE (also known as EECDH).

So which should you choose ?

Here’s why you care :

ECDHE is widely supported now, and there is no reason at all you shouldn’t offer it to your visitors.

If you’re using TLS 1.3, you can skip right ahead, it only offers secure ciphers 🙂

If you also offer TLS 1.2 or lower however, you can easily mess up and weaken your customers’ security.

We won’t delve deep into the pros and cons of this or that cipher in this post, but a good guideline is as follows :

While AES with a 128-bit encryption key might seem weaker than AES with a 256-bit key (the more the better right ?), the latter is the subject of related-keys attacks that actually make it easier to crack than the 128-bit variant. Go figure 🤷‍♂️

As for ChaCha vs GCM vs CBC, here’s a quick rundown as to why :

AES in GCM mode is so dangerous that cryptographers around the world are directly quoted saying so, slide 11 of this presentation.

Wrap it all up in a congruent configuration

Let’s sum up our ideas here :

And ensure you’re good by testing

You’ve done your homework, you’ve adjusted your configurations (you did warn your customers beforehand, like, WAY ahead right ? This is no small change !), now you need to ensure your configuration reflects what you wanted to implement.

There are several free tools to verify your TLS configuration, the most known of which is Qualys’ SSL Labs.

In the end, you should be looking pretty good.

It’s not all about the pretty colors though, expect your customers to run these scans on your own website ! 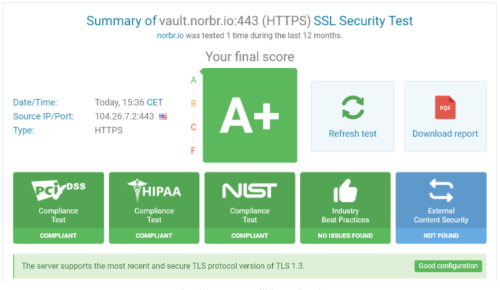 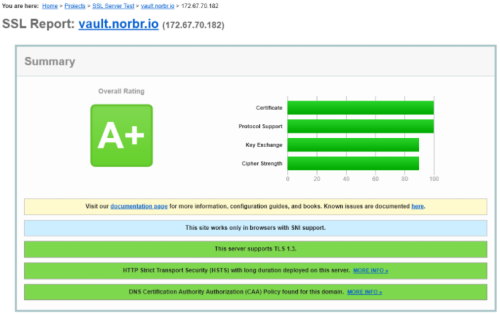 The opportunity to royally mess up lies around every corner, and that’s a literal (hello AES GCM).

As a CEO, CTO, or Compliance Officer, you should ask your teams what configuration was implemented to protect your customers’ communications, and why it was done this way.

Most importantly, you need to ensure your staff remain on top of the most recent developments in the fields.

After all, attacks land one day and are exploited the next (if not the same or even before).

Head over to ARS Technica’s writeup on an actual attack leveraging Heartbleed.

By clicking "Accept All Cookies", you agree to the storing of cookies on your device to enhance site navigation, analyse site usage, and assist in our marketing efforts.
More Info

This website uses cookies so that we can provide you with the best user experience possible. Cookie information is stored in your browser and performs functions such as recognising you when you return to our website and helping our team to understand which sections of the website you find most interesting and useful.

Strictly Necessary Cookie should be enabled at all times so that we can save your preferences for cookie settings.

If you disable this cookie, we will not be able to save your preferences. This means that every time you visit this website you will need to enable or disable cookies again.

Please enable Strictly Necessary Cookies first so that we can save your preferences!